What is a Leash Reactive or Leash Aggressive Dog?

Recently, I started a workshop for leash reactive or leash aggressive dogs and their owners. I have found that many people who have reactive dogs enroll in group classes hoping that the group setting will help their dog grow accustomed to being around other dogs. Mildly reactive dogs usually get used to a class situation after a few weeks but other dogs may find the setting too overwhelming. In other cases, a dog might be reactive to a particular type of dog or in a specific setting that the group class cannot mimic. Usually people who enroll these dogs in class have recently adopted the dog and are often are more interested in helping the dog get used to other dogs than general obedience. So I started the workshops to specifically address this behavior because in the basic group classes the focus is on general obedience and the level of training required for the reactive dog requires a different focus and skill set.

A frequent question I receive is “what is a leash reactive dog”? The term “reactive” is somewhat vague. Although it is a term that is commonly used in the dog training world, the term can have various connotations to your average dog owner. Reactivity in dogs can manifest itself as lunging, jumping, rearing up like a stallion, snarling, growling, barking and overexcitement. A leash-reactive dog is one that is especially reactive while on a leash. Interestingly, many leash reactive or leash aggressive dogs are perfectly fine off-leash and many of them play well in dog parks.

So why are dogs more reactive on leash than off-leash? There are several possibilities. One reason is that the leash prevents dogs from behaving the way they would normally behave when they see another dog. For dogs that are overly excited, the leash prevents them from greeting the dog and they react in frustration which devolves into barking and lunging. For fearful dogs, they may perceive that the “flight” part of the “flight or fight response” is not an option because they are stuck on a leash and feel “trapped.” In some cases, the dog reacts in response to tension on the leash because the owner is pulling back on it in anticipation of the encounter. When the dog feels the tension in connection with seeing other canines, the dog may perceive that there is a threat and become more aggressive. Sometimes if the owner jerks on the leash, it is a simple association between seeing a strange dog and pain (from the tightening of the collar).

This behavior can manifest itself at adolescence. A dog that has been socialized as a puppy can still become reactive. Some adolescent dogs can become feisty and test out certain behaviors. My female akita who is now 2 years old started manifesting this behavior at about a year. She had been through puppy kindergarten, basic obedience, intermediate and advanced obedience classes so she had a lot of socialization and been to the dog park etc. Now, she did witness an attack of my 13 year old akita by a neighbor’s loose shepherd while we were on a walk (the neighbor left the front door open and the dog ran from his property) which probably did not help. After the incident, she whined and became vigilant every time we walked by that house. My old akita was unharmed. The two male dogs rolled around before the owner called his dog away and my old guy dusted himself off and trotted away like nothing happened. My old male is a rescue that I adopted as a previously intact two-year old adult and I have a feeling that he was used to minor scuffles with his male and female Akita housemates. But, my female who was still a puppy at the time was left with quite an impression and she started becoming reactive soon after this incident. Granted, there is a breed predisposition for dog aggression in Akitas and she was a feisty adolescent so it is possible that she would have become somewhat leash reactive despite this incident and reactivity can be common in the guarding breeds. For example, in obedience classes, my akita can sit touching (butt-to-butt) with a classmate, but if she sees a strange dog approaching the outskirts of class, she will start barking in alarm. Small dogs can be reactive too so this behavior is not limited to the large dogs. In fact, several dogs in my workshops have been small or toy breeds.

Regardless of the reason why a dog has become leash reactive, it is important to not overreact to the situation. Yelling, scolding and tightening or jerking on the leash can exacerbate the problem and give your dog the false impression that there is something to be worried about. In the case of my Akita, I started a program where I taught her that good things happen when she sees another dog while on a leash. I have also taught her that there are options to standing her ground and lunging. In fact, whenever we pass by the house where the shepherd lives and we see him by the gate, she gets a treat for looking at the dog and then looking at me. Although this seems like a simple routine, it took weeks of training to get her to this point where she could focus on me and there were intermediate steps involved. Eventually, I put this behavior on cue by uttering the phrase, “there’s your friend,” and clicking and treating when she looks at the dog and then looks at me. She then gets another reward for following me past the gate without reacting (this is the options part of the equation where she learns that retreating is an alternative). I use my happy “let’s go” voice and act like nothing is bothering me. With Akitas, retreat is not something they naturally do so it took a lot of training to teach her to ignore other dogs. Luckily, the shepherd has no problem with my female and just sits by the gate staring at our strange little exercise. Slowly, she has gotten less reactive to dogs while on walks and defaults into turning her back on other dogs and sitting facing me whenever another dog is around.

My dog has doggie playmates and has good social skills once she gets to know a dog but my current goals are for her to be calm around unfamiliar dogs and not lunge at them while on a leash. It is not important for me at this time for her to be buddy-buddy with every dog she meets. My goals are realistic for her current stage in this training process because she is a large, strong, rowdy, adolescent that needs to learn a little self-control while on walks and not react on impulse. Sometimes it is more important to have lots and lots of minor successes (not reacting and ignoring a dog) compared to having a few stupendous interactions (doggie play) followed by a bad interaction. It is important to be aware of what your dog can handle and set your dog up for success. 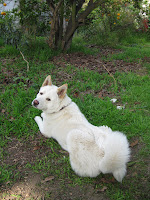