My dad has been in the hospital and I have been taking care of his female corgi mix until he gets home.  At first, she came into my house like gangbusters trying to push everyone around, claiming everyone’s sleeping places and hoarding all the toys from the toy box.  My female Akita loves her and did not take a lot of her aggressive stances very seriously and, instead, constantly invited her to play.  My 2 senior dogs, on the other hand, were not thrilled with this rude little intruder and displayed a number of behaviors to try to defuse the situation and reduce the risk of conflict. I was able to capture some of these interactions on film and thought it would be a good opportunity to discuss canine communication.

Many signals that dogs put out are very subtle to the human eye because they are so different from primate body language. Often dogs show us these signals to let us know that they are uncomfortable or stressed.  Conflicts arise when we humans fail to recognize these signals or we misinterpret the message our dogs are trying to convey.

Recognizing and understanding canine body language is critical when trying to manage multi-dog households.  Perhaps more importantly, understanding the messages your dog is trying convey can help you forge a better relationship with your dog and help you and your dog navigate through situations that make him/her uncomfortable. Here are a few common signals that are important to be on the look out for:

This is a behavior dogs will often perform when they are under stress or unsure of what is happening around them. What distinguishes this behavior from a dog “licking his chops” is that it is more frequent and more like a tongue flick. It is a behavior that Turid Rugaas terms a "calming signal" (see book reference below). A "calming signal" is a behavior that dogs display to each other to prevent or reduce the risk of conflict.  It is a way for a dog to try to defuse a situation and calm the other dog (or person) down or even to calm themselves down. 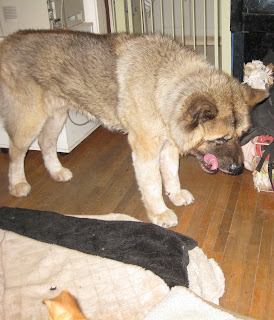 In the photo above, my male Akita just came into the house to find my dad’s dog sleeping on his bed and also blocking his path. He paced back forth several times in front of her licking his lips before he finally walked past my dad’s dog and found another place to sleep. My Akita is not very confident and tries to avoid conflict as much as possible so the lip licking not only shows his discomfort approaching the new house guest but also his attempt to walk by her in close quarters without triggering a reaction or make her feel threatened.


In the videos below, the dogs show this behavior in response to the camera being too close to them:

Head Turns
One of the more common signals a dog will emit is the head turn away from another dog or person. This is another behavior that Rugaas considers a "calming signal."  I most often see this behavior when a dog is being approached by another dog or human and the dog is not quite comfortable with what is happening or when the dog is trying to show the other dog that he/she is not a threat. In the picture below, my shiba inu is not very comfortable with my dad’s dog and is turning her head away from her to avoid direct eye contact, which can be threatening to another dog.


Another scenario where I see head turns is when a dog or puppy is being hugged or kissed by a human being and the dog is not comfortable with this show of affection. Hugging for a primate is a normal expression of affection but is not comfortable for most dogs.  Often accompanying the head turn in this scenario are other calming signals such as lip licking or yawning (see below). This is probably one of the most common situations where humans fail to read the signs of the dog’s discomfort and if ignored can lead to a growl or dog bite to the face.


In the picture above, my shiba inu is not comfortable with someone taking a picture so close to her when she is on her bed.  She is displaying both a head turn and lip lick. When you see this behavior in this type of scenario, it is best to give your dog more space.


The picture above shows my dog being hugged by someone he knows fairly well. You can tell he is straining to turn away from the person. While he is tolerating being hugged, he is not really enjoying it. He is a shy and somewhat fearful dog that I rescued as an adult. Therefore, this is a situation where I would tell guests not to hover directly over or hug this dog, especially young children. Even though this is a large dog, the same rules would apply to a small dog that shows the same behavior. In fact, I rarely grab dogs around the neck or kiss them on the face.  I find that most dogs would rather be petted and given a little more breathing room, especially from strangers.


It is important to respect these signs and reduce your pet's stress and discomfort by not putting them in situations that make them uncomfortable. Working at a dog’s comfort level helps build a more trusting relationship. One way to do this is to approach an unsure dog by turning the side of your body to the dog. Hovering, hugging and direct eye contact can be intimidating to a dog and can provoke a dog to growl or bite. Most dogs are comfortable approaching a human when the person's side is facing them and the person's head is slightly turned away (a calming signal).  This is especially true of fearful dogs.

Colleen Pelar who has written several excellent books on raising children with dogs has the following videos on her website demonstrating the stress and calming signals dogs exhibit when they are being hugged or kissed. When you watch these videos, try to identify the calming signals. The videos can be found at:


Another "calming signal" is a body turn.  Often when dogs approach each other one or both will turn their bodies rather than approach head on. If one dog approaches and the other turns away very deliberately, the dog is signalling that “I am not a threat.” It can also be a sign that the dog turning away does not feel comfortable or does not want to interact.

In the pictures above, the two dogs are showing a lot of calming signals.  It is these signals which help maintain harmony and minimize altercations.  In the days since these photos were taken the two dogs have become more comfortable with each other and there is less supervision required on my part.  Fortunately, both dogs are surprisingly good at expressing calming signals and have made my job much easier.

Sometimes in class I see dogs doing body turns or head turns (usually accompanied by lip licks or yawns) away from their owners. Usually I will ask the owner to give the dog a break from training for a few minutes. The dog is not trying to ignore the owner or being obstinate, an example of when dog behavior is often misinterpreted, but rather the dog may be stressed or is uncomfortable with something that is happening around him.

The interesting thing about calming signals is that humans can reflect a calming signal back at a dog.  For example, turning your own head or body from a dog that is exhibiting a calming signal (yawning, lip licking or head/body turns) can help put them at ease.


Sometimes dogs will yawn for reasons other than fatigue. This is another behavior that Turid Rugaas terms a "calming signal."  Yawning can occur when a dog is stressed or uncomfortable.  Try yawning back at your dog when you see this behavior and see if your dog relaxes.


The pictures below show dogs who are relaxed and comfortable with what is happening around them. The mouth is relaxed, not tensed and the eyes are soft.


In contrast, dogs who are on guard, nervous or uncomfortable usually have a tight, closed mouth or tense face.  The look in the eyes may be hard or intense and the ears may point forward rather than be relaxed.


Often you will see dogs shaking their bodies in much the same way they shake off water after a bath. When I see this with my dogs, they are usually reacting to something unexpected or trying to dissipate some nervous energy or tension.  The video below shows some examples of this behavior.


Most people recognize this move.  It is an invitation to play and most dogs react positively when they see this posture.

Some dogs sneeze multiple times when they are excited or stressed.  My Shiba sneezes and prances excitedly when I come home and greet her. 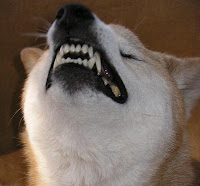 These are a few of the many facial expressions and forms of body language that are expressed by dogs. In this blog I am focusing on some of the calming signals and other less obvious behaviors that dogs will also exhibit to humans.  It is important to recognize these signs and identify what may be causing your dog discomfort or stress. Knowing these signals can also enhance your own interactions with your dog. To learn more about dog body language, the books below are a few good resources: