Most of my private consultations involve dogs living in homes with children. After going over the benefits of reward-based training and how responsive dogs are to positive reinforcement, I get one of two responses from parents: “does this apply to children too?” or “you mean like how we raise our kids?”

A recently published article described how positive, reward-based training, which traditionally had been applied to marine mammals, could be applied in schools. One elementary school attempted to apply this program to see if it could reduce behavioral problems and fighting. By implementing this program, desired behavior was rewarded or encouraged while undesired behavior was ignored or redirected. The school reported a dramatic drop in the number of suspensions and fighting.

This is not the first article to address how marine mammal training can be applied to humans. Several years ago a humorous, yet instructive article came out in the New York Times which chronicled one woman’s experience applying exotic animal training to her marriage in an attempt to modify her husband’s less desirable habits. The husband in question left clothes on the floor and other undesirable habits. The author found, that the more she nagged, the more resentful her husband got. When she rewarded her husband (by showing affection or praise) whenever he put the clothes in the hamper, she found that he was more willing to keep the house clean. 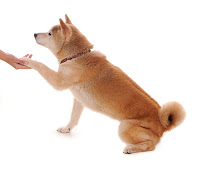 While these articles address how positive training can be applied to humans, a more important question is: should our canine family members be treated differently than our human family members? While positive training is commonly used with exotic animals, physical punishment or coercion is still commonly used with canines, the species that has had a close relationship with humans for thousands of years. This begs the question: if you would not discipline your child using harsh methods, why should you treat your pet dog any differently?
Posted by Pawsitive Feedback Training at 11:25 PM