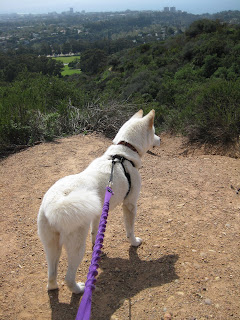 There seems to be a growing trend for people to disregard leash laws and allow their dogs to walk off leash or roam their neighborhoods unattended. Several incidents happened this week which motivated me to write a blog about leash laws.  First, several clients mentioned incidents with off-leash dogs in their neighborhood that could have ended tragically. Second, a friend who lives in West Hollywood forwarded me a notice from the city informing its residents that the City of West Hollywood will be strictly enforcing the Los Angeles County Leash laws due to the growing number of complaints the city has received. The City informed its residents:

In response [to the complaints], the City has asked the Department of Animal Care and Control to strictly enforce the City's ordinances requiring dogs to be kept on a leash in public, including in public parks (the Hart Off-Leash Dog Park exempted).  Animal Control Officers have been deployed throughout the City and have issued a number of citations over the last week.

Walking your dog without a leash is a violation of Chapter 10.32 of the Los Angeles County Municipal Code, which is enforced in West Hollywood.  Violators will be cited $250 for the first offense, $450 for the second offense, and $850 for the third.


While it may be a sign of pride that your dog can walk off-leash or it may be based on the notion, that the dog is happier off-leash, leash laws serve several very important functions which help protect both the public and the animals living within city limits.

First, leashes help keep the dog within the owner's control.  The leash will prevent your dog from getting into an altercation with another dog.  Even though you think your dog is friendly, the other dog may not be friendly or may be very fearful.  In addition, your dog may not like every dog he/she encounters. Leashes help prevent serious injuries from such encounters.

Second, not every human likes dogs.  There are some people who are very frightened of dogs and being confronted by an off-leash dog (even if friendly), can be traumatic.  In addition, children can be knocked over by a large, enthusiastic dog.  Keeping your dog on leash respects other people's space and possible discomfort towards your pet.

Third, many people are working with reactive and/or leash aggressive dogs.  Running into an off-leash dog can not only trigger an aggressive encounter, but can also set that person's training backwards.  Many of these dogs are fearful and having a predictable environment helps the dog overcome that fear.  Running into off-leash dogs when outside the safety of that dog's home can reinforce aggressive and fearful behavior.  Many of my clients who are working with their reactive dogs have had runs with off-leash dogs and it is unfortunate that these run-ins can have such a negative impact on someone's training program.

Fourth, your dog may not respond to your verbal cues 100% of the time and there is always a possibility that your dog will chase somebody's cat and do harm to that animal.  In a similar vein, your dog may chase another animal into oncoming traffic and run the risk of being hit by a car.

For people who allow their dogs to roam the neighborhood unattended, the same arguments apply.  Your dog may be hit by a car or may wander into someone else's property where there is a territorial resident dog.     Not only are there penalties for free-roaming dogs but there are issues of liability if that dog harms another person or animal or damages someone else's property.

So while many people have idealized notions of walking their dog off-leash, this is not practical or safe for a busy and crowded city like Los Angeles.  There are designated beaches and parks where dogs can safely be off-leash. Soon other cities in Los Angeles County may follow suit and begin to strictly enforce these laws.


Posted by Pawsitive Feedback Training at 9:59 AM