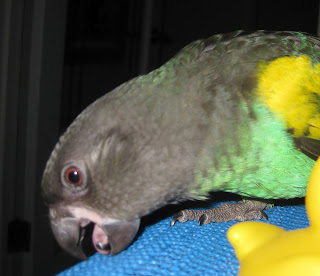 Sometimes my parrot growls at me. Yes, I said “parrot” and “growl” in the same sentence.  Parrots do growl and this one was not imitating a dog.  She was playing with a toy and when I reached out to pet her, she gave a distinct growl and flashed her pupils at me.  This dilation and constriction of the pupils is called “eye pinning” or “eye flashing” and it can mean excitement, curiosity or aggression in parrot body language, which is not very helpful by itself unless you look at the context of this behavior and other visual signs such as raised feathers, stiff body etc.


So, like any good animal trainer, I stopped what I was doing, waited for the bird to fold down her feathers and relax.  Then once she was relaxed, I slowly withdrew my hand and analyzed the situation.  Had I proceeded, I would have likely gotten a bite on the finger or at minimum an attempt on her part to strike out at me with an open beak as a further warning to back off.
The bird’s display conveyed a very important message.  The growl meant “back off, you are making me uncomfortable.”  I noticed that anytime her mouth was occupied with something, whether it was a toy, a stick or food, she did not want to be touched.  This was important information.  Was the parrot trying to “dominate me”?   I doubt it.   Was she trying to guard her toy?  Unlikely, since I can take toys and food away from her at other times.   Does this mean that the parrot is not fully hand-tamed and may not be comfortable being touched when that very important beak is otherwise occupied? This is a more likely and plausible explanation.  Will I respect the growl?  Absolutely.


This incident made me wonder why is it that when a parrot or cat makes a warning display like a growl or a hiss, we humans immediately respect the warning and don’t press forward or punish the animal.  Most people would not assume that the cat or bird was trying to dominate them and would not take it that personally.  After all, they are just being a bird or a cat.  Why is it that we take it so personally when a dog growls and feel compelled to punish the growl?  Is it because we expect them to be our “best friend” rather than just like any other animal that has the potential to be scared or threatened?
Should we scold or reprimand a dog for growling?  There are several reasons for not punishing an animal when he/she is exhibiting a warning signal.

Suppressing a warning signal leads to escalation.  First, and perhaps most importantly, when we try to suppress a low level warning signal such as a growl or lip curl, the animal learns that this initial warning is ineffective and is being ignored.  When this initial warning goes unheeded, the animal may bypass this step in future encounters and go straight to DEFCON 1, the Bite.  Warning signals such as growls, hissing, and lip curling are valuable pieces of information.  It is the animal’s way of telling us, “I am really uncomfortable with what you are doing right now and please stop before I have to escalate.”  By trying to suppress this behavior, we are actually encouraging the dog to exhibit more aggressive forms of behavior.

Punishment reinforces fear and defensive behavior.  Second, punishing an animal for exhibiting a warning signal reinforces the animal’s perception that there is indeed something to be threatened about.  The animal is trying to communicate, “back off’ and if the intended recipient of that signal does not back off and instead retaliates the animal will in turn escalate the encounter by biting.  Tactics such as yelling, pinning a dog to the ground, staring down a dog or grabbing them by the scruff are actually counter-productive and can increase aggression in an animal.  For studies that support this contention see my article on the risks of using aversives in training.


Punishment may create unintended consequences.  Third, you may be unintentionally creating a negative association with whatever the dog is growling at or threatened by.  For example, if the dog growls at a certain person who enters the room and you punish the dog whenever this happens, this can reinforce the dog’s perception that when that person is in the room, bad things happen.
Punishment erodes trust.  Fourth, punishment makes the animal more defensive in your presence and this erodes the bond of trust that should exist between you.  For example, if I punished the bird for growling at me whenever there was a toy in her mouth, then the bird would be very distrustful of my presence anytime she wanted to pick up a toy to play with.  For an animal that is not fully tamed, this would severely set back any trust-building that we had previously developed.


So, what should you do if your pet growls at you?


1)   Stop & Withdraw.  Immediately stop what you are doing.  Do not move forward so the behavior does not escalate.  If you are fairly far away or if the growl is clearly a warning, wait for your pet to relax.  Once your pet relaxes, carefully, withdraw your hand or move back.  If the growl appears intense, you are very close to the dog or a bite seems imminent, play it safe and stop what you are doing and withdraw.


3)   Come up with a game plan.  Once you isolate the trigger(s), first try to determine if these are situations that can be managed.  For example, telling strangers not to hover over your dog or to give your dog more space, or provide your dog a “safe zone” such as a gated area or room when guests come over. Then determine if you can work with your animal to change his/her perception of these triggers.   For example, if your dog does not like strangers reaching out their hands, ask strangers to stand at a distance your dog can handle and toss treats to the dog so that the dog learns that strangers are not so scary.   If your dog has a sensitive body part, determine if there is a physical injury or if your dog is ticklish.  Then try to teach your dog that brushing or handling is a positive experience.  See my videos on body handling.  If your pet seems to be guarding resources such as food bowls, people, sleeping places, toys or other objects, it is best to contact a certified trainer or behaviorist to work on a training plan with you as these behaviors can sometimes be tricky to deal with.


4)   Become familiar with your pet’s body language.  Often there are signals that precede the growl.  For example, in dogs, the dog might suddenly go stiff or get very still.  You may notice your dog staring at you in a very direct manner. Identifying precursors to the growl may help you head off the behavior earlier in time. In addition, identifying early stress signals can help identify situations that make your dog uncomfortable.   See my article for a discussion on canine body language.  In addition, Here is a video of some common canine stress signals:


5)   Seek Professional Help.  If you are in doubt about what is triggering the behavior, if the behavior seems unpredictable or if you are unsure of how to handle your pet’s behavior, contact a certified trainer or behaviorist to help you develop a behavior modification program.  In some cases, severe aggression or guarding behavior is best handled with the help of a professional.  Make sure you choose someone who advocates methods based on positive reinforcement.  See my article on finding a  qualified dog trainer.


So, how did I resolve my parrot’s behavior?  I identified the trigger (does not like petting when things are in her mouth) and approached the issue as follows:


1)    Assess the behavior and my need to touch the bird in that context.  I made the assessment that I really do not need to pet her when she is busy doing something else like eating or fiddling with a toy. Would you like someone pawing at you when you are eating or concentrating on something else?  Instead, I reserved petting sessions for when she was relaxed and not occupied with something.


2)   Build a better bond through clicker training.  I worked on taming her further and building up more trust between us.  She was not fully hand-tamed so I worked on body handling and teaching her that I was not a threat.  I also did simple clicker-training tricks so that she would enjoy working with me.  Targeting my fingers was also a way of teaching her to interact with my fingers by tapping them (rather than nibbling).


3)   Teach an alternative behavior.  I taught her to drop objects (you can do this with a dog too).  So in the event I need to retrieve something out of her mouth, she will let go of it voluntarily.  See video of her retrieving and dropping an object.

4)   Set up a petting protocol.  I set up a petting protocol.  Parrots are not like dogs.  They are not really domesticated and they are prey animals so they are naturally skittish.  Before petting her, I would say, “can I pet you? and put my thumb and forefinger together much like I did with the targeting exercises in the vidoe.  If her pupils flashed or if she raised her feathers, I would leave her be.  If she was still relaxed, she got a pet and a treat.  This protocol achieved two objectives, it gave her a heads up that I am coming to pet her and it also set up a positive association with the words, “can I pet you” and the actions that followed (a head scratch which parrots love and a treat). Eventually the treat was faded out because the head scratch was nirvana for her. She got to the point that when I asked if I could pet her, she would bend her head over to receive a head scratch.  So she gave me an obvious signal that she wanted to be petted.  We essentially established a way of communicating so she would not be caught off guard and she received pets when she was ready and willing to receive them.
So, if you find yourself in a situation where your pet growls at you or somebody else, respect the growl and figure out how you can work with your pet in a productive manner.  We are not being permissive but acknowledging that there is a behavior that needs to be addressed.  It is better to address the behavior and its underlying cause in a proactive manner through behavior modification rather than try to put a band-aid on it and merely suppress its outward expression.

Posted by Pawsitive Feedback Training at 11:10 AM